SAVE WILLARD'S CLOCK - THE TIME IS NOW. MAKE A DONATION TODAY.

Download a donation form below. Click to download, print it off, and send it in with your donation. All checks need to be made out to Save Willard's Clock.
Order a Brick Paver here online
Donation form download.
History of the Clock
​
﻿Quote from Bob McNeal of Ultimate Restorations.﻿
"As the great treasure's of the past slowly disappear, so do our stepping stones to the future.
​Nothing to tell us who we were or who we are".
We want to save our clock! Join us!﻿ 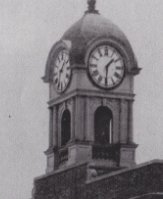 It was started in 1913 and completed in 1914, this truly significant structure is connected to the B & O Railroad in the downtown area. The building stood and served as a beacon of hope to many traveling from other parts of the country and world to settle in Chicago Junction, Ohio now called Willard and take railroad and farm jobs in the area. Willard is a connecting point between cities across the nation. The clock structure built by local carpenters/craftsmen are not seen in today's age and kept people on time and on track.

Help tell the story of the people that built the town, helped those who passed through on their way to a better life.
Join our mission to preserve the history of the Willard Town Clock for future generations.  Be inspired with the story of people who saw a new beginning in a hard world, risked much to change it, and made our community a kinder and compassionate place.
​
November 1913, Chicago Junction purchased clock workings and a bell from the Seth Thomas Clock Co. for $1,064. With the help of the builders of the City Hall and the Seth Thomas Clock Company of Chicago, IL, a clock tower, the clock mechanism and a pure brass bell were designed and installed atop the new (at that time) City Courthouse and City Hall.

The Clock mechanism/motor was powered by 1,300 pounds of weights, suspended from pulleys. That would mean someone had to climb up to the clock tower every few days and rewind the weights to keep the clock running. Sometime during the mid-1900s, the clock was electrified and an electric motor was installed to drive the clock. In the 1970s a new facade (Aluminum Siding) was also wrapped around the old tower shell of the clock to make it weather tight. In 1997, the Clock tower was taken down to be rebuilt and installed in another location. It was to be placed on top the new City Hall building, from what has been said. That never happened as costs were too high. Most all the clock (metal workings, dial faces, dial hands & bell) parts were saved when it was dismantled. As the tower sections were gone through it was found to be in worse shape than thought.  The clock was secured at the Willard waste water treatment plant until something could be done. A committee was formed in 2000 to determine what to do. The decision was made to try and rebuild the clock tower and save what they could.  Three estimates were received from various Clock Companies.  Due to high cost restrictions, interest in restoration faded and the clock was stored outside for the next twelve years. Since that point in time, we've lost the bell tower portion (The opening area below the clock face area where the bell hung) and foot sections of the clock. The Clock roof section (domed section) is in bad shape and not able to be salvaged
Another group formed in 2012. We now want to rebuild the Tower to look as it did in 1913. With the razing (2013) of the old Willard City Hall building the clock originally sat on, we now must build a new tower about 45 to 50 feet high at the other end of downtown Willard. The new location is where the current gazebo sits now in the city parking lot at Myrtle Avenue and Pearl street.  A new Clock Tower plaza has be established and named after another local Willardite who gave back to Willard in his lifetime. Some bench seating has been added including a covered stage area to replace the gazebo when it is torn down.  The base section of the tower will be built with glass viewing windows so visitors will be able to see the old clock motor. We also plan on a time capsule to be added in as well.  Our vision is to rebuild the clock in running condition!  As of March 2019 we are on the cusp starting the build with a few more donations. There are several ways to donate to the clock tower project. Straight donations can be mail to Save Willard's Clock and mailed to PO Box 367 Willard, Ohio 44890. Buy a Willard, Ohio Rediscovering History book for $45. A 600 page hard Cover book with hundreds of B&W as well as color photos and history from the area. You can also buy a brick paver at our website. Look for that information link on this web site. The Time has Come and The TIME IS NOW to save this one piece of Chicago Junction/Willard history.