SAVE WILLARD'S CLOCK - THE TIME IS NOW. MAKE A DONATION TODAY.
From the Wilson's
To Rick Reed
Hi Rick,
Sorry, I did pick up the book on Wednesday but have been on the go.  You did a great job on the book and it portrays the real essence of Willard in the past and during the time I was growing up there!  It brought back so many memories.  I grew up on a farm on Rural Route 12 (used to be called B&O Pike).  My grandfather built the house in which we lived while he worked on the railroad at night.  The pictures of the locomotives are wonderful!  I am so pleased to have it and want to thank you for the work you put into it.  In fact, I am going to order one to be sent to someone living in Willard.  I will get back to you on that in a couple of days.

The only way I found out about the book was from reading an article in the paper but I ended up doing some research in order to send the contact form.  I am sure people there know about the Clock but might be motivated to buy the book if they knew you are donating the proceeds.  I don't understand why the local business owners have not contributed.  Is there some objection to the project?  This project has been going on for several years and I would think it would have more interest in it.  It may not be the most pressing issue for Willard but it would do a lot to preserve its heritage.

Also, when the Clock Project is finished, I would like to buy some pavers honoring the Laser family.

Thank you again for the fantastic book.  I will share it with my 93 yr. old mother and my sister. 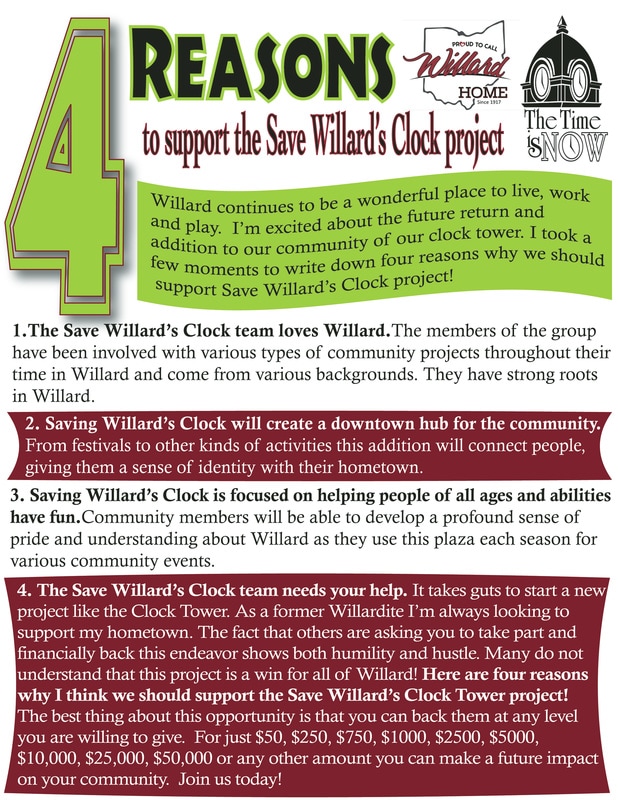